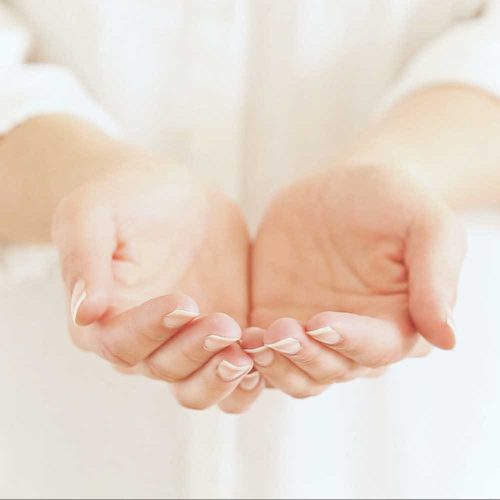 Despite all our best-laid plans, at some point in our lives most of us will face a loss, serious illness, or other crisis that could potentially hurl our lives into chaos.

What can we do to help manage stress? We asked Women Together participant Gail Matthew to share her extraordinary story of courage, hope, and humor in the face of life-threatening cancer.

When the pain and fear rises in her as it so often does in the dark quiet of the early morning, Gail turns to her routine — she gets out of bed and walks around her apartment, systematically relaxing each muscle, slowing her breathing, all the while focusing on the present moment. Finally, she sits down and reaches for a book which has a special meaning to her, No Mud, No Lotus, by Vietnamese Buddhist monk and teacher Thich Nhat Hanh.

“Without the mud, you cannot grow the lotus flower,” Gail explains.

Without the mud, in this case, cancer, Gail says she would likely not have been able to make her inner journey from fear and uncertainty to peace. Gail’s speaking voice is strong. She exudes warmth even as she talks of having difficulty with her vision. She has three brain tumors that are putting pressure on her optic nerve. “I’m turning a setback into a comeback,” she laughs. “Sometimes I feel so well that I think I’m fine — really the medical charts just got mixed up.”

Gail’s family and friends, including many of us who have come to know her through LifeWork, are in awe of her remarkable strength, self-awareness, courage, and unfailing sense of humor. While it might seem unfathomable, Gail is not living wholeheartedly despite adversity, but because of it. The cancer has been the mud — and Gail herself the blossoming lotus flower.

Her astonishing transformation began, oddly enough, on April Fools’ Day in 2015 — the day doctors told her she was suffering from malignant melanoma, the most deadly form of skin cancer. Although her prognosis was initially excellent (greater than 96 percent chance of a full recovery is what doctors told her), Gail saw the diagnosis as a sign that her life needed to move in an entirely new direction.

Through Women Together events and courses in Irvington, New York, the local 70-year-old resident along with her husband, Dave, began exploring what they believe and why, and how their past experiences and choices influence their current thinking and behavior. Today, they say our Mindfulness-Based Stress Reduction (MBSR) course is proving especially helpful — as Gail battles a sudden and aggressive recurrence of the disease.

WOMEN TOGETHER  Three years ago, you were teaching special needs children and your husband was enjoying his new career as a mental health counselor. Then everything changed. Could you take us back to the time when you learned of your diagnosis and tell us what you were thinking and feeling?

GAIL  On April 1, 2015, I found out that a small growth I’d discovered on my shin was melanoma. I had it removed, but after the surgery, I realized that my life needed to change. I was very happy as a special education teacher, but I realized I needed to create a life that would carry me forward, and that’s what LifeWork has been — the opportunity to change my point of view, to make a life that sustains me no matter what the future brings.

A few months later, I attended a Friday night talk at LifeWork about life purpose, given by Marcelo Cardoso. I ended up going to his life purpose weekend workshop and found it to be absolutely fascinating, interesting, and unexpected.

WOMEN TOGETHER Since this was your first time exploring personal growth, can you tell us what was going through your mind during the workshop?

GAIL  I remember vividly one night calling up a man who I’d been in the life purpose workshop with and saying to him, “Oh my gosh, what am I going to do if I don’t like who I become?”

To which he said, “It’s unlikely — you’ll probably like who you are even more.”

I had some fears because I’m a Christian and there were a lot of new ideas that I felt were New Age and would be strange. But I also saw a lot of my friends who were in their seventies and eighties becoming more and more closed and narrow-minded and afraid to go out and do things. I didn’t want to be one of those people. I found that at LifeWork, there were a lot of people who were not only nonjudgmental, they were on the same road I was of evolving, processing, and learning.

I soon realized that instead of my own personal faith getting less, it became more because I had really thought about things.

WOMEN TOGETHER What has impacted you the most?

GAIL  Marcelo’s workshop was profound for me — I grew up with the belief that worry was a good thing and that you don’t have choices. Marcelo helped me see that this isn’t true — it’s actually possible to shift into a new way of thinking. But the really life-changing piece for me was when he talked about how we try to recreate the missing needs of our childhood in our present-day life. I realized I was doing that a lot.

I saw that I needed to stop and think when I was in a situation — that maybe any reaction I might be having was due to an unmet need that had nothing to do with the person or the situation. It was actually up to me to figure out what the truth was. That was probably the most meaningful lesson for me. I’ve taken his workshop twice, and each time it’s been really, really helpful.

WOMEN TOGETHER Over the next few years, you and Dave attended a number of other workshops and courses, including Mindfulness-Based Stress Reduction (MBSR). Today, you both benefit tremendously from MBSR. Could you tell us more about this?

GAIL  When I had the cancer on my leg, they told me that there was no follow-up treatment. The doctors said they had removed all the cancer and the chance of recurrence was less than 4 percent. But then on May 4 of this year, three years after the original surgery, I found myself back in the hospital in ICU with a tumor in my groin as well as stage 4 brain tumors — the melanoma had metastasized.

What I have found, which has been so amazing, is the peace associated with being able to live mindfully. I use the tools that I have been taught through these workshops, and I’m able to stay present. I’m not saying it’s always easy. I’m not saying there haven’t been tears, none of that, except that I’ve been able to stay present with what I know to be true right now and to not go with, “What if? Why me? This isn’t fair.” I’ve also stopped thinking ahead and worrying about what could be.

WOMEN TOGETHER You mentioned that you had trouble sleeping, and that what you learned in the MBSR program helps?

GAIL  Well, I’m on some pretty heavy duty medications, and I have found to stay in bed in the middle of the night is not helpful. I do the mindfulness breathing and walking, and while it doesn’t often get me back to sleep, it does calm me down. Just staying present, rather than letting my mind just go wild, is powerful. I really can control my mind in a way that’s positive.

WOMEN TOGETHER You’ve talked about the way that people describe you since you began doing this work in 2015. What have people noticed and said?

GAIL  I think the biggest thing that people have said is that I’m more open. I’m more willing to share who I am. I’m not as closed. When I first had the melanoma, the small surgery, I didn’t let people know what I was going through. This time I was comfortable enough to be able to say, “This is what I’m dealing with,” and to be able to hold what Marcelo used to call, what he might still call, holding a space for people, and not building boundaries.

Also, I definitely have gotten stronger. I’ve become stronger as a woman. I have opened my mind to new ideas. I’ve experienced a lot of joy and have been able to take pleasure in things that I once would have just blown right past without taking the time to see them and participate in them. Now, I’m opening my hands and embracing what is present.

Has (or how has) mindfulness, meditation, or another practice helped you during an exceptionally difficult time? Cancel reply

Read
Navigating Cancer
A Women Together Q&A with Gail Matthew
by Trish Orwen
Despite all our best-laid plans, at some point in our lives most of us will face a loss, serious illness, or other crisis that could potentially hurl our lives into chaos. ... 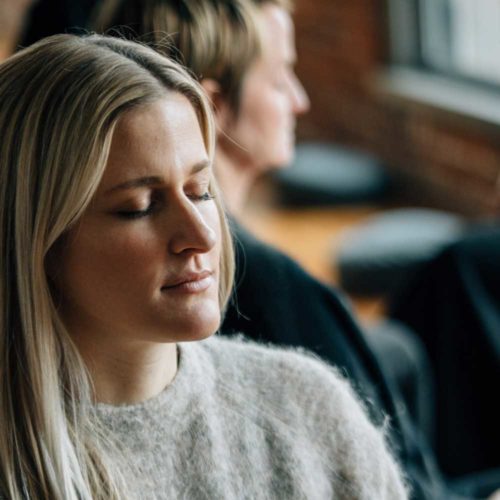 Eileen Fisher on
Why We Need Each Other
Life Learnings: People and Moments That Shape Us
ENJOY MORE: Life After Overdrive

Eileen Fisher on
Why We Need Each Other
Life Learnings: People and Moments That Shape Us
ENJOY MORE: Life After Overdrive